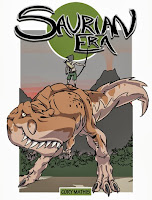 Volume One:
Where you meet Flint and his riding beast, Kumra.

This is a follow on from the original Saurian Era Animation and my first attempt at making a comic. No idea what I'm doing but boy, I sure do like to draw dinosaurs fighting and stuff! 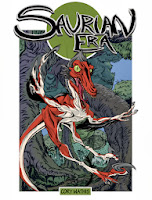 Volume Two:
Where I needlessly introduce another human character all for an excuse to draw some Raptors then have a guy try and beat them up. Does he succeed? Read and find out! 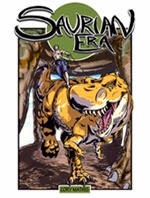 Volume Three:
Bringing the previous two together and starting a new story line revolving around a giant racing event.

This current storyline is taking a break as I fill out some back story in 'The Reef.'
Sorry 'bout that! 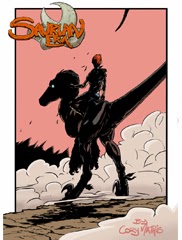 Saurian Era : Trinn
On their way to the yearly races at the village of Saltside, roving adventurer and occasional military courier, Trinn, and her tame sickletoe come across a trio of rowdy carnivores harassing a young sauropod.

This one-shot story was made for the kiwi comic anthology, Faction Vol.2. It's intended to lead into Vol.3 of the previously finished mini-comics.

New comments are not allowed.